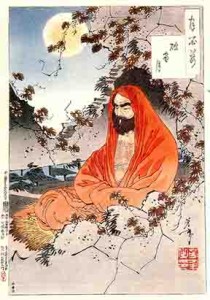 Bodhidharma is credited with bringing Zen Buddhism to China and he is the First Patriarch of Chinese Zen Lineage. He was born on Oct. 5th. (Chinese Lunar Calendar) in Southern India, and was the third son of an Indian King; the royal family belonged to the Bhramin caste. Bodhidharma’s Buddhist Master, Prajnatara, was the 27th Patriarch of Indian Buddhism, taught Bodhidharma for many years, gave him Mind Transmission, made him the 28th Patriarch, and gave him the name Bodhidharma. Following the instruction of his Master to transmit Dharma to China, Bodhidharma travelled east to Southern China in 526 AD. When he arrived in Kwang Chou, he was ceremoniously welcomed and greatly honoured by the local military official named Shao Yang. The same year, he was invited to the Capitol, Nanjing, to meet Emperor Wu Di of the Liang dynasty. Because the communication between the Emperor and Bodhidharma was mutually unsatisfactory, Bodhidharma left the palace, crossed the Yangtzu River, and continued north until he arrived at the Shao Lin Temple in Ho Nan Province. It was here that Bodhidharma became famous for meditating 9 years facing a wall.

After he gave his disciple, Hui Ko, the Robe, Begging Bowl, Lankavatara Sutra, and Mind Transmission, Bodhidharma went to Chen Sung (One Thousand Saints) Temple to propagate the Dharma. He passed into Nirvana in 536 AD, was buried in Shon Er Shan (Bear Ear Mountain) in Ho Nan, and a stupa was built for him in Pao Lin Temple. Later, the Tang dynasty Emperor, Dai Dzong, bestowed on Bodhidharma the name Yuen Che Grand Zen Master, and renamed his stupa as Kong Kwan (Empty Visualisation).

We are tracking some of your browsing history in order to enhance your shopping experience.